How to debug memory issues using Allocations in Swift 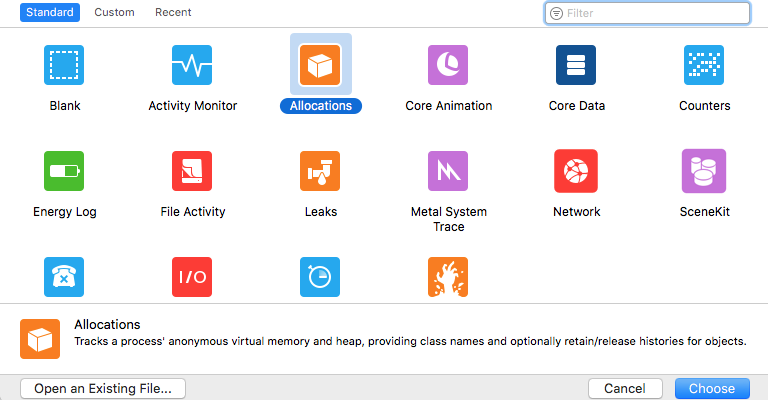 In this blog we gonna see about Debugging Memory issue in Swift. Before we deep dive into the concept we should learn some basic things.

Value Types: Each instance keep a unique copy of its own data. Usually in Swift struct, enum or tuple falls into value types.

Reference Types: Many instance share a single copy of the data. In swift we have class which is reference type.

The above is a raw definition of value and reference types. The concept here is value types are stored in stack memory whereas reference types are stored in heap memory. Stack uses static memory allocation on the other hand heap uses dynamic memory allocation. Stack which is faster than heap usually get deallocated when it goes out of the scope (i.e normally out of the function or a class). But heap won’t deallocates automatically which is responsible for memory leaks.   In swift we have a clean technology called Automatic Reference Counting which will deallocates the reference types automatically on our behalf. But we need to consider relationships between each instance we create.

In SecondFloor we are having a text view to type message and a button to send the message to FirstFloor.

Here we are having a delegate method in SecondFloor to pass message to FirstFloor.

After typing message, we are sending message to FirstFloor. Then we are dismissing from SecondFloor.

Here ARC won’t deallocate SecondFloor instance. Because we have created a strong retain cycle between FirstFloor and SecondFloor.

Usually in debug navigator you will be able to see references. Now I kept a break point in FirstFloor inside goToSecondFloor IBAction method.

Now we are going to see how to debug memory issue. Click on the Debug Memory Graph option in the Debug Tab bar. Now you will be able to see the references we are maintaining in our project. Here we could able to see AppDelegate method which is Singleton and with one SecondFloor instance which was not deallocated. If you click on the SecondFloor reference you will be able to see the retain cycle in the graphical representation.

Here we are having a strong retain cycle between FirstFloor and SecondFloor. So we need to break that retain cycle.

There is also another way to Debug Memory issue. For that first you need to clean the project folder(cmd + shift + k) and profile your project(cmd + I). Xcode has a inbuilt developer tool called Instruments. In that we are having Allocations to track virtual memory and heaps. Choose Allocations, In top left corner of Allocations tool choose your device and project you profiled and click on the record button. Instruments will start recording, you can perform the screen navigation in your device/simulator and stop recording.   In Allocations, you will have different option to see the result like Statistics, Call Trees etc. Here I am choosing Statistics option to see the result. Now I am selecting Statistics option to debug.

Here you will able to see the number of columns and rows of the recorded result.

We have created a strong reference cycle between FirstFloor and SecondFloor. We know that ARC won’t increment reference count for weak or unowned reference. So we are making SecondFloor instance as weak.

By making secondFloorVC instance as weak we could be able to break the reference Cycle.

Now we have seen how to debug a basic memory issue using Allocations in detail. In our next blog we will see in detail about some of the most common memory issue mistakes faced in the project.